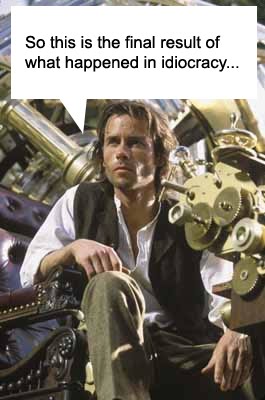 Just FYI, this little story was written 2 years ago. My how things are still the same…

I occurred to me that society is headed down the drain. Anything we can do about it? Nah, probably not. You see it would take a huge (and I mean huge) change in the structure of our society such as a catastrophic event to really change how we as a people act.

Here’s the reason we are heading down this path. I was eating at Chili’s one night and a group of teenagers were in the booth behind me. I heard them asking the waiter how much they should tip him. This is when I realized we are doomed as a society.

This current generation has had everything spoon fed to them. They have been told what to eat, wear, think and in the not too distant future they will be ripe for someone to just take over and run every aspect of their lives. Thus, there is going to be an even smaller elite ruling class in the years to come.

Now I am not saying that it’s just the current generation’s lack of self exploration, it’s been happening for quite some time now. It seems to be (without actual research) that somewhere in the 60’s or 70’s that our society moved to this sort of ‘spoon fed’ mentality. They did it because they could. They wanted the best for their offspring and they did what they could which meant really molly coddling their kids. This has continued and is now at a point where it is out of control. When kids come into the adult world with no life skills they are going to be easy picking for any group or people who spend the effort to influence those uncertain minds.
What I see is what I have said, a very small elite ruling class, a dictatorship, or some other all-controlling power.

I suppose that this will lead to some sort of revolution and all that jazz. I suppose it would be pretty close to H.G. Wells vision of humanity in The Time Machine. Won’t that be interesting?