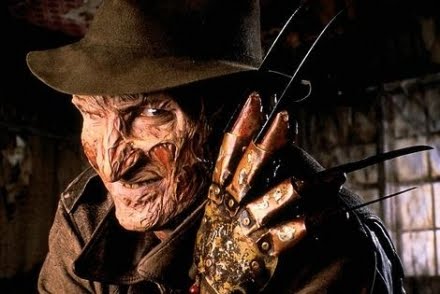 A Nightmare on Elm Street jumped the shark with part 4. They were doing fine until then. Freddy was still mostly scary and they finished him off (by burying his bones). After that there was no reason for him to come back. It became total crap.

Now, Wes Craven’s New Nightmare was a FANTASTIC concept (and mostly pulled off). I think it could have been better given the premise.

Freddy Vs. Jason could have been THE GREATEST MODERN HORROR MOVIE OF ALL TIME but it just didn’t work out. The plot was somewhat solid, the playthough sucked.

The new Nightmare movie coming out next year look like crap. I’m sorry to say I’m not that excited. It looks to be VERY cliche. Also the makeup doesn’t look scary, just sad. Who knows, maybe it will be great!